Last Friday night (August, 24th) I went to Aula Barat ITB. I went there because, my ITB Choir friend, Lona, asked me to join with her to watch that performance.
The concert shown Izaline Calister, a Carribean Jazz singer who has very wonderful voice. Beside a singer, Izaline Calister is also composer and lyricist. She is a charismatic performer, mixed with Afro-latin sounds and jazz. She studied the music in Holland for several years and met the jazz accoustic band there. They are two men who played acoustic guitar (Ed Verhoelf) and percussion (Roel Calister, her younger brother)
I had a chance to take a picture with her. Wow… it’s incredible. Here the picture is: 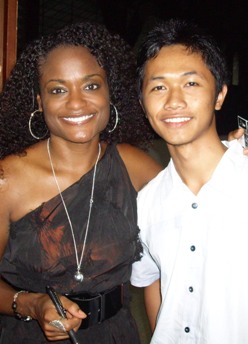 3 thoughts on “Concert of Izaline Calister”